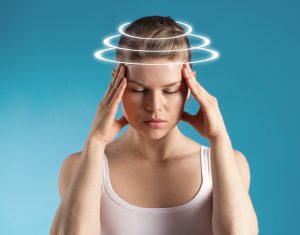 BPPV or Benign Paroxysmal Positional Vertigo is a condition that causes patients to experience recurrent attacks of vertigo often lasting for only a few moments and which are triggered by particular head movements. Although the problem can affect people of any age, it is most common in the over 50s.

If you are experiencing symptoms of dizziness or vertigo, it is important to rule out other causes that can include blood pressure changes, infection, trauma or a problem within the brain and/or spinal cord itself. BPPV is the most common cause of Vertigo seen by us at Neuroworks Chiropractic practice – and for most patients, is quite easy to remedy.

If the symptoms described sound familiar, please call to arrange an appointment on 020 8566 3757 and we can assess your problem. If it is BPPV, we can begin appropriate treatment, if it is something that we feel, requires further assessment, we can refer to you another health care professional.

The Causes Of BPPV

Ealing Chiropractor, Johan C Jeronimus, founder of the Neuroworks Chiropractic Clinic, explains that the distressing symptoms of BPPV, that can involve nausea and, less frequently, vomiting, are usually due to a build-up of tiny calcium carbonate crystals floating freely in the fluid of the inner ear. This type of BPPV is referred to as, Geotropic. Particular head movements or positions can result in crystals sending confusing, random messages to the brain as they brush against the sensory, hair-like filaments that, in normal circumstances help us to maintain balance.

Apogeotropic is the name for the type of BPPV where the tiny particles of calcium have attached themselves to a domed structure called the Cupula in the ear.

There are other causes of BPPV and these include an imbalance in the structure of the inner ear and changes in the Cupula that may include a decrease in density due to excess intake of alcohol.

How Do We Assess BPPV?

Because different types of BPPV are characterised by particular head positions that trigger them, the diagnosis of a specific type of BPPV will usually involve placing our patient in different positions and monitoring which cause symptoms. Characteristic, uncontrolled eye movements or nystagmus are also an indicator, so observing these and other signs enable us to determine the type of BPPV a patient is suffering from. This is important, as each type requires a different treatment method.

When the cause is free-floating calcium carbonate crystals within the inner ear, a series of positioning manoeuvres can move the particles into the back of the ear canal and deposit them within a ‘pocket’ there – where they are less likely to cause problems triggered by movement.

After repositioning, your Ealing Chiropractor will often suggest that patients remain as still and upright as possible to ensure that the treatment is as effective as possible.

In some cases, Vestibular Rehabilitation Therapy or VRT can be effective, although a follow-up course of treatment may be necessary for BPPV sufferers who are still experiencing symptoms.

We may also suggest that patients avoid salt and caffeinated drinks for a week after treatment and consider cutting down on both, thereafter as a reduction in the intake of these chemicals has been shown to reduce the formation of the calcium carbonate crystals within the inner ear that trigger BPPV – thus reducing the likelihood of further episodes.

If you are suffering from the symptoms of BPPV, the good news is that the conservative treatment methods offered by your Ealing Chiropractor can often bring relief from symptoms after a single treatment.